Gin has always been high proof. In fact, we don’t think you should trust one under 90 proof, but that’s just our personal opinion. It is well documented that, historically, the Navy’s importance on the flavor of gin cannot be underestimated. In fact, there is quite a bit of evidence that suggest that the Navy was an important buyer of many early distilleries. With it’s easy access to spices and botanicals, as well as clean water, most of those early distilleries were based at major maritime cities where officers, who were often paid in Gin, were visiting. What follows is a history of Naval Gin and sorting fact from fiction. 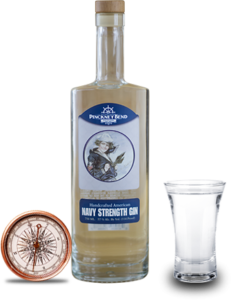 Before the invention of the hydrometer, alcohol was not easily measured. Luckily, the British Royal Navy created a way simple way to “prove” what they were buying was not diluted product. They mixed a small sample of the spirit with gunpowder to form a paste and try to ignite it. If the spirit was over a certain strength, the powder would light, and if under it wouldn’t. This was proof it was alcohol, and easily measurable. Hence the original Navy Strength Gin, which was called 100º UK proof Gin, was born.

After there were more accurate ways of measuring alcohol, the navy continued to buy the spirits at 57%, as a matter of tradition. Thus, all 100º UK proof gins must be 114 proof. The term ‘Navy-Strength’ was created in 1993 by a branding consultant of Plymouth. The term neatly summarized all the history of 100º UK and thus a new subcategory was born.
Since much of our mission involves ‘doing it the old way’ we latched on to this concept of naval strength. We took our American Gin botanicals and ramped up the juniper and coriander. What transpired is a dangerously smooth expression of a fiercely juniper flavor profile. With a touch of heat, but a smooth, clean finish this gin is perfect in just about any traditional cocktail.