Years of research and a dedicated group of historians has lead to a true field-to-glass whiskey made from rare, historically important heirloom corn varieties. Over the course of over a decade, we intend to find our favorites and reclaim biodiversity in distilling.

History in a Glass

When you want to know what whiskey tasted like before prohibition, you have to also talk about the corn grown then. And by talk about it, we mean learn every.intimate.detail. about. corn. We did that. This program is the effort of decades of time, energy and research of a small, but dedicated group of individuals. We are proud to be part of a small group of distillers using heirloom corn and being part of a larger movement to bring back biodiversity to distilling.

We release one varietal per year, in limited quantity. We work with local farmers to propagate and grow these corn varieties and then grind, distill and age. We make only what the crop yields that year so once gone, there are no guarantees it will return.

This variety of white dent corn was named prior to 1875 and grown in the Appalachians, but the Native Americans in Northern Florida originally cultivated it much earlier. Over time, Hickory Cane became popular in the South and the Ozarks, where it was also known for making excellent whiskey.

With a dark burnished color, the aroma is a heavy molasses with hints of clove. With a nutty sweetness, the flavor doesn’t linger with a very clean finish. With mid-tongue taste reminiscent of a toasted walnut, this release showcased why this varietal was prized for grits, roasted corn and whiskey.
Aged one year

This popular and prolific heirloom variety is based on “Indian Corn” that was originally grown in the Northeast. It’s two-color ears produce all coppery red or all dark yellow kernels. An Iowa farmer developed it to the stature of a named variety, and it remains on of the few open-pollinated varieties that continue to be planted to this day.

Wapsie Valley Heirloom whiskey has a light tawny appearance and a candied fruit aroma. Taste is light up front with a large, spicy fig flavor. The finish is soft, but lingers. This starchy dent corn grinds easily and is popular for cornmeal.
Aged One Year

Settlers along the southern colonial frontier grew Pencil Cob, which is named for it’s shoepeg kernels and unique, pencil-thin cob. This old field corn variety was popular with both farmers and distillers. Its kernels are traditionally ground for cornbread while stalks are used to support climbing bean vines.

A beautiful golden chestnut hue sets the tone for this easy sipping spirit. With a floral-oak nose, this corn gives off hints of both cherry and cedar. With a soft front to a spicy-sweet middle, the soft finish lingers with hints of oaked maple syrup. Still grown by a few stalwart seed savers to this day, this varietal was a staff favorite.
Aged 18 Months

One of the most prominent corn varieties grown in Missouri in the last century, it was especially popular with farmers working the rich bottom ground along the Mississippi and Missouri rivers. today, this old favorite is making a resurgence among heirloom corn enthusiasts. Known for it’s high yields and ‘multi-purpose’, this variety is just as good eaten fresh or left to dry.

With it’s deep copper color and tobacco aroma, this chameleon-spirit has a lot of nuance when enjoyed over time. A spicy front reminds you of rye whiskies while the sweet-oak finish lightly lingers. Often a favorite of our rye-drinkers, this 100% corn spirit is both earthy and fruity.
Aged One Year 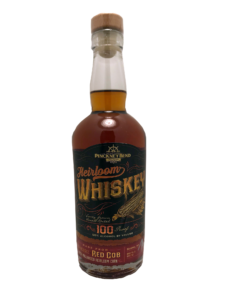 In 1840, Tennessee was the leading corn-producing state in the Union and much of the corn grown was this variety, generically known as ‘Indian Corn’. Red Cob began appearing in seed catalogs prior to 1900, and was popular throughout the Ozark region. Though it is a soft, white dent corn it has a red germ which gives it a unique color and aroma. It was a superior grain for flour, grits and, or course, whiskey.

A stunning golden auburn color sets the tone for this distinct spirit. A malty-sweet aroma combine with a savory and nutty front. This whiskey has many nuanced layers on the finish with faint hints of butterscotch. The same flavor that made it a natural choice for grits has also makes it a favored variety for Whiskey. A staff favorite.  Aged 2 years 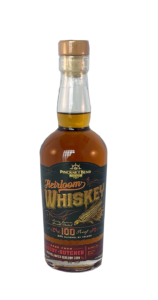 Bloody Butcher corn is an heirloom variety believed to have been passed from Native Americans to settlers in Virginia in the 1840’s.  It has a rich red color and when ground, the cornmeal is spotted with red flecks, like a butcher’s apron. Hence the name. More than a hundred years ago Bloody Butcher corn was known as a good all-around variety for roasting, flour, meal, and livestock feed. It was also popular with folks who produced illicit whiskey in the Missouri Ozarks. Today this heirloom variety is growing in popularity among craft distillers.

This 3-year expression has a beautiful golden honey color and a delightful new-baseball glove smell. The taste begins with a marmalade sweetness, but finishes with a deceptively long, but soft, back. Everything about this whiskey evokes the sensations of a cedar log cabin. It is quickly becoming a staff favorite.

Why Heirloom? An in depth process

Whiskey The Way it Was 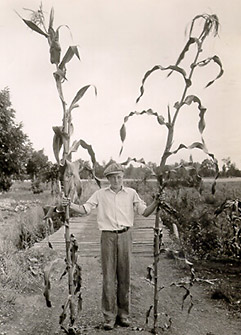 The open pollinated corn varieties used by our ancestors to make whiskey are disappearing, and when they are gone they will be gone forever. What follows is a detailed description of a program by which Pinckney Bend Distillery will produce whiskey ‘field to glass’ using rare and hard-to-find heirloom varieties of corn. The heirloom varieties we select will have been historically associated with making whiskey, and to the degree possible, grown in our region prior to the introduction of hybrids in the 1930’s. Pinckney Bend Distillery will:

What is Heirloom Corn? 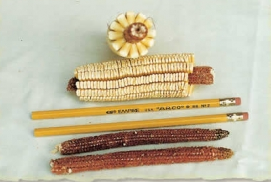 There is no established date for when a corn variety becomes heirloom. Some varieties such as blue corn have been grown and used by Native Americans for centuries. Others were developed as late as the early 20th century. Heirloom varieties all have three things in common. They are; 1. open pollinated, 2. no longer grown on a commercial scale, and 3. genetically quite different from today’s hybrid and GMO corns. Heirloom corn varieties are often (but not always) associated with specific geographic areas. They are also associated with specific characteristics.

In the 19th Century pioneers grew the corn that they brought with them. Over time some varieties performed better than others, and farmers in a given area often came to grow the same varieties as their neighbors. However, every farmer selected seed corn from his own fields for planting the following year. In this respect, every farmer became a hybridizer, and there is often considerable variability within specific heirloom varieties.

Dr. Brian Campbell, author of “Closest to Everlastin'”: Ozark Agricultural Biodiversity and Subsistence Traditions, is a Cultural Anthropologist. He has studied the Ozark Region extensively, and has been a valuable resource in helping us identify heirloom varieties that were commonly grown. 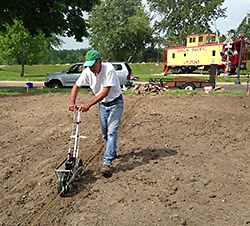 Propagation and test plot sites were located on adjoining vacant lots on Main Street, only 50 feet from the distillery. This is excellent river bottom ground, which has not been cropped in more than a century.

Two 12′ x 12′ plots were established and provided seed for the following year’s one-acre production fields. With optimized fertility, moisture, weed and insect damage control, these plots produced about 1.5–2 bushels of shelled corn. This is enough seed corn for planting, plus sufficient spare grain.

Production fields are grown in partnership with a local farmers who have the land, equipment and experience necessary to grow open pollinated corn varieties.

One-of-a-kind corn creates one-of-a-kind whiskey. Each heirloom variety is as unique as it’s history. We release one variety a year, currently schedule through 2029. We believe variety matters and are dedicated to finding out what whiskey tasted like before prohibition. Join us on this program. Find your favorite.

Food Print
Whiskey Distillers are bringing back biodiversity in Whiskey 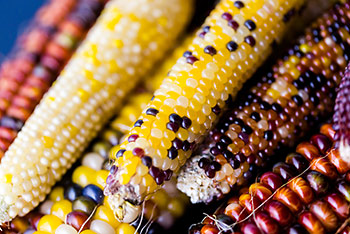 Spring 2016
Begin the process again with another heirloom variety.