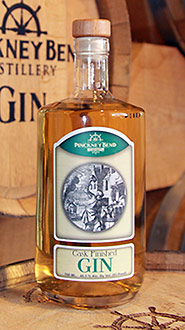 Our new Cask Finished Gin, proudly adorned with a gold medal awarded at the San Francisco World Spirits Competition, is now available. Thanks to the complexities of state and federal labeling requirements, we were able to enter this unique gin in competition before it was released.

Pioneered by the Dutch 400 years ago, gin was transported in wooden barrels until the early 19th century. Crossing the English Channel from distillers in Holland to markets in London, gin could spend several months in contact with wood, where it picked up both color and flavor. Today, this old ‘cask finish’ style of gin has become new again.

The basis of this expression is Pinckney Bend’s award winning American Gin, which is smooth on the pallet, with bright juniper and well-balanced citrus notes. It is then finished in charred, second use Missouri white oak barrels, which introduces a layer of complex wood flavors, a subtle vanilla-infused sweetness and the spice of young whiskey.

Cask Finished Gin should begin working its way into retail channels by mid-July. If you don’t see it on your favorite retailers shelves, ask them to get it for you.

Just in Time for Gift Giving, or Winter Sipping! 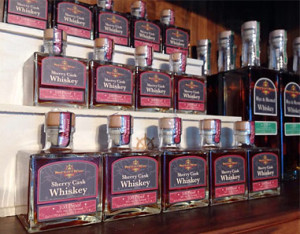 Want to finish your holiday shopping early? We have now released a limited supply of our small barrel, select whiskeys. These will only be available in the tasting room, and only in 200mL bottles. They will be sold individually, or as a 3-bottle boxed set. Sherry Cask, Stout Cask and Rye and Rested are included in the branded wood collector’s box for $75. Since these are only at the distillery, you have (yet) another reason to come on down and see us.

Port Cask Finish
After a year in new oak, this whiskey is then finished in a port barrel from Stone Hill Winery in Hermann MO. American whiskey made from corn, finished in a traditional Scottish style.

Sherry Cask Finish
After a year in new oak, this whiskey is then finished in an Oloroso sherry cask. American whiskey made from corn, finished in a traditional Scottish style.

Stout Cask Finish
Second Shift Brewery in New Haven, MO finishes some of their acclaimed stout in our whiskey barrels. We return the favor by using the barrels to finishing our year old whiskey.

Zinfandel Cask Finish
After a year in new oak, this whiskey is then finished in a French oak Zinfandel barrel from Peter Franus, Brandlin Vineyard on Mount Veeder, Napa Valley.

Once It’s Gone, You’ll Have to Wait at Least a Year!

Rye History
In the late 1700s and early 1800s rye was the grain that most American whiskey was made from. As the country expanded westward, corn began to replace rye and by the end of Prohibition, rye had largely disappeared.

Flavor Profile
The spicy, sometimes described as ‘peppery’ notes of rye whiskey often show best when blended with the natural sweetness of whiskey made from corn. Distinctive vanillin and caramel notes add complexity and character. Rye & Rested Whiskey is a blend of 55% rye and 45% Pinckney Bend’s award winning Rested American Whiskey. The result is a unique flavor profile that accentuates the best aspects of each spirit.

Production
The rye is aged in new, standard sized whiskey barrels, where the Rested is aged in new 15 gallon barrels. Here at the distillery, both whiskeys experience a seismic event every 40 minutes. It’s called the Missouri Pacific Railroad, and we are only 300 feet from the tracks.

Where to Buy
There are only 100 cases of Rye & Rested American Whiskey available, so distribution is limited. When it is gone, it will not be back until Batch #2 is ready to bottle, and that will be at least one year. It’s available in 750 ml and 200 ml bottles. While it lasts, Rye & Rested can be purchased at: